The Journal of History   Spring 2011   TABLE OF CONTENTS

This is the first of three parts exposing the One World Government agenda. My extreme gratitude is extended to the publisher of https://tabublog.com/2014/01/18/revisionist-history-7-owners-of-empire-the-vatican-the-crown-and-the-district-of-columbia/ for this information.

Three other sources tend to prove that the One World Government agenda is real. They are
http://drrichswier.com/2014/06/15/washington-d-c-seat-caliphate/
http://cosmicconvergence.org/?p=1167
http://prepareforchange.net/2017/01/29/3-corporations-run-the-world-city-of-london-washington-dc-and-vatican-city/

TABU; Towards A Better Understanding

Revisionist History #3; Owners of Empire: the Vatican, the Crown and the District of Columbia
Big Brother, Business, Conspiracy, Revisionist History January 18, 2014 Comments: 2
The Mad Hatter: Have I gone mad? [Alice checks Hatter’s temperature] Alice : I’m afraid so. You’re entirely bonkers. But I’ll tell you a secret. All the best people are.


***“Since I entered politics, I have chiefly had men’s views confided to me privately. Some of the biggest men in the United States, in the field of commerce and manufacture, are afraid of something. They know that there is a power somewhere so organized, so subtle, so watchful, so interlocked, so complete, so pervasive, that they had better not speak above their breath when they speak in condemnation of it.” – Woodrow Wilson, 28th President of the United States, The New Freedom, 1913***

“The very word “secrecy” is repugnant in a free and open society; and we are as a people inherently and historically opposed to secret societies, to secret oaths and to secret proceedings… Our way of life is under attack. Those who make themselves our enemy are advancing around the globe… no war ever posed a greater threat to our security. If you are awaiting a finding of “clear and present danger,” then I can only say that the danger has never been more clear and its presence has never been more imminent…

For we are opposed around the world by a monolithic and ruthless conspiracy that relies primarily on covert means for expanding its sphere of influence–on infiltration instead of invasion, on subversion instead of elections, on intimidation instead of free choice, on guerrillas by night instead of armies by day. It is a system which has conscripted vast human and material resources into the building of a tightly knit, highly efficient machine that combines military, diplomatic, intelligence, economic, scientific and political operations. Its preparations are concealed, not published. Its mistakes are buried, not headlined. Its dissenters are silenced, not praised. No expenditure is questioned, no rumor is printed, no secret is revealed.”  — John F Kennedy, 35th President of the United States, from a speech delivered to the American Newspaper Publishers Association on April 27, 1961 and known as the “Secret Society” speech (click here for full transcript and audio). 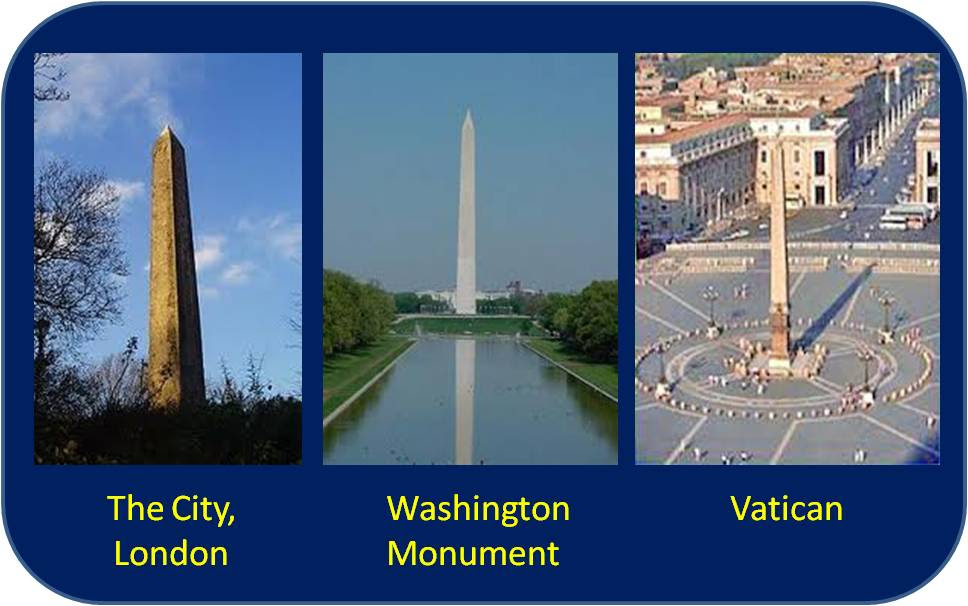 Located in the center of each city is an Egyptian obelisk erect. They are: the obelisk in St. Peter’s Square, the Washington Monument, and Cleopatra’s Needle in the City of London. Of course, one question you might want to ask yourself is why is there an Egyptian obelisk, which is a tribute to the Egyptian “pagan” sun god Amen-Ra, in the middle of Vatican City? Contained within these three cities is more than 80% of the world’s wealth.

One of their means of control is to have agents of their cause in high places of influence. This cabal of powerful manipulators is known collectively as the Illuminati, the Shadow Government, the Omega Agency, the Government within the Government, and so on. It does not matter what they are called. They are there and have been actively and legislatively writing away our freedoms and also have been working towards the New World Order. Examples of this is the USA PATRIOT Acts, H. R. Bill 1955, the European Union Constitution, and the Security and Prosperity Partnership.

Obelisks are phallic shaped monuments honoring the pagan sun god of ancient Egypt called Amen Ra (sun rays) — spirit of this pagan god is said to reside within the obelisk. The stranglehold Empire Cities have over humanity is achieved through secret societies such as Freemasons (Scottish Rite & Prince Hall) — members are “blood brothers” having sworn to “ever conceal and never reveal” the principle secret, which is the “G” in center of “compass and square” represents Lucifer and they are his soldiers which have been given titles of Royalty (exalting them over humanity)…thus they are known as the “Black Nobility”…

— these along with Worldwide Freemasonry form the nexus of the global management team, which binds Zionist-British hereditary monarchies (Royalty) and Anglo-American plutocracytogether.

Empire States are “sovereign” — operating above all other nation states

, whose installed leaders MUST make pilgrimage to Rome and do obeisance before their earthly king. 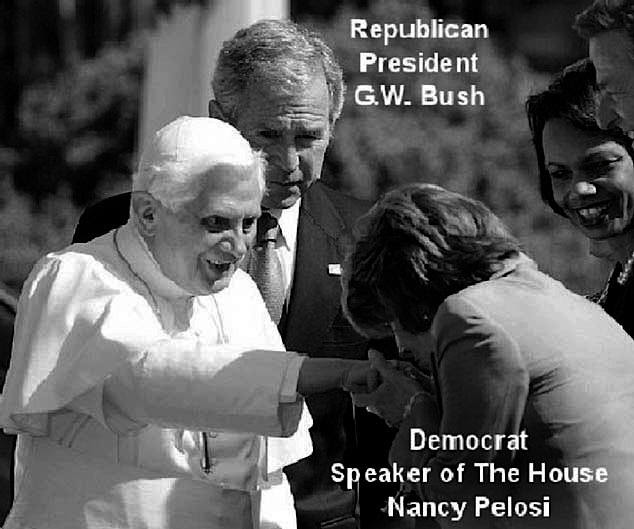 The President of the United States and a grinning Secretary of State observe the Speaker of the House kissing the Pope’s ring. “The real menace of our Republic is the invisible government, which like a giant octopus sprawls its slimy legs over our cities, states and nation… The little coterie of powerful international bankers virtually run the United States government for their own selfish purposes. They practically control both parties, … and control the majority of the newspapers and magazines in this country. They use the columns of these papers to club into submission or drive out of office public officials who refuse to do the bidding of the powerful corrupt cliques which compose the invisible government. It operates under cover of a self-created screen [and] seizes our executive officers, legislative bodies, schools, courts, newspapers and every agency created for the public protection.” – New York City Mayor John F. Hylan, New York Times, March 26, 1922